When Yiwu defines ties with China …

When Yiwu defines ties with China … 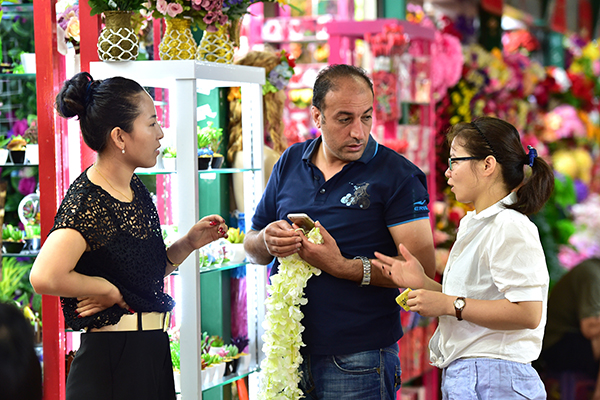 Last year, 3.6 lakh Indian businessmen from all over the world travelled to this industrial southern Chinese trading city. Its only attraction: a 5.5 million square metre commodity market stretching over the equivalent of 750 football fields that sells 1.8 million goods sourced from every far corner of China.

Every day, traders from 90 countries can be seen scouring a multi-floor international market, which stocks everything from mobile phones and televisions to toy airplanes and jewellery. Yiwu’s commodity market is so vast, spread over a dozen districts, that officials say a visitor who spends three minutes at every booth, over an eight-hour day, would need a whole year to finish his tour. If your home has a ‘made in China’ product, chances are that at some point it passed through the sprawling town of Yiwu, the world’s biggest, and perhaps least well-known, trading megapolis in the southern province of Zhejiang.

Last year, Yiwu shipped goods worth $780 million to India. If China’s emergence as the world’s factory propelled Yiwu’s growth over the past three decades as it became a hub for goods produced across all of southern and central China, today its commodity market is grappling with a host of challenges from the recent slump in demand, especially from the West, to a struggle to remain competitive amid China’s appreciating currency, up by one-third to the dollar since 2005, and rising wages, local traders told The Hindu.

The city government this week detailed an ambitious two-fold plan: reaching out more to emerging economies such as India, Southeast Asian countries and African countries in a shift away from the West; and by taking forward plans to build an ambitious e-commerce industry and moving up the value chain.

Economy bedrock
The Communist Party chief in Yiwu, Li Yifei, told visiting Indian reporters the city saw its trade with India as ‘bedrock’ of its economy. India last year grew to become Yiwu’s second largest export destination. Of the half a million foreign traders who visited this city in 2013, three out of four were Indian. There are 1,089 Indian businessmen living in the city, Mr. Li said, with 34 permanent offices and more than 233 partnerships with local companies.

In 2012, the city was in the headlines over a bitter dispute involving two resident Indian traders, who were held hostage after the owner of their firm fled overseas while owing more than 10 million Yuan ($1.6 million). The incident prompted the Indian Embassy in Beijing to issue a trade advisory directed at Yiwu. Mr. Li appeared to express some frustration at the advisory and the attention received by the case. He said the proportion of such disputes was ‘relatively low’ considering the volume of trade with India.

“I require my officials to solve these disputes in a very rational and down to earth way and to not be emotional… taking extreme measures as establishing black lists,” he said. “We cannot harm the trust and confidence between the two sides”.

Local traders said disputes were on the rise on account of the slump in foreign trade. Mr. Li said most cases were on account of the business model which sees traders from here sending their goods before receiving payments. Mr. Li said he would assure traders from India that disputes would be handled fairly as the government was ‘expanding dispute solving channels’, for instance, through the recent setting up of a dispute resolution centre and an online system for credit checks. The bigger problem, he acknowledged, was the great challenge posed to the city’s business model by the sweeping changes across the once export-driven Chinese economy.

“Goods here are no longer as cheap as in many other countries in Asia,” said one gloomy trader of toys on a slow day. He said factory wages were up by 30 per cent, while the appreciating yuan currency made his goods less attractive.